A Man, His Moments and His Movies 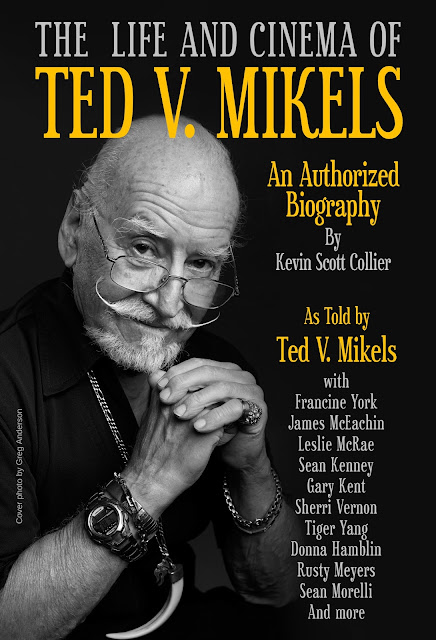 Before iconic filmmaker Ted V. Mikels passed away on October 16, 2016, he granted me, author Kevin Scott Collier, unprecedented access to his life story for The Life and Cinema of Ted V. Mikels, a book not only about his film career, but about the man himself.
From December 18, 2015 until May 10, 2016, Mr. Mikels and I communicated vigorously trading questions and answers compiling information to write the story of his life. He not only strongly approved of the book project, but went above and beyond all expectations. Thus it didn't just become a book project, it became a commitment to Ted. How can one tell the tale of man of such incredible achievements, and who had changed so many lives in the motion picture industry?
Our communication had essentially ceased after I had received all of the information on all of his films, including the making of 10 Violent Women II. In the final few months of his life, he had been in Hospice. My biggest regret is that he did not live to see the book, which will be published on April 29, 2017, which would have been Mr. Mikels' 88th birthday. Look for it on Amazon beginning that date.
Mr. Mikels was a pleasure to work with, and I had been a big fan of his movies for some time. I personally thought it was sad that an extensive work on his life and films had never been issued in book form.
So, I approached him in an email in mid-December last year, and was surprised when he was 100% on board. Thus, we began a 87 year odyssey of memories, names and faces, and miles and miles of film.
We worked together on his history, filling in gaps with my research concerning persons from his early life. He was also thrilled that I took the initiative to seek out actors and actresses that had appeared in virtually all his films to comment on them, as he recalled moments with them. I appreciate the participation of James McEachin, Maureen Gaffney, Gary Kent, Leslie McRae, Sean Kenney, Francine York, Sherri Vernon, Barry Hostetler, Tiger Yang, Foster Boom, Rusty Meyers, Sean Morelli, Cara Jo Basso, Volmar Franz, Brinke Stevens, John Baniqued, Donna Hamblin, Anthony Avery, Kellie Karl, Kevin Sean Michaels, Cory Udler, Amanda Jade, Richard Lester, Gary Lester, Beverly Washburn, Mr. Lobo, Fletcher Sharp, Sarah Dunn, Joshua (Peaches Christ) Grannell, Scott Marlowe, Dawna Lee Heising, Drew Marvick, Raymond P. Whalen, Marc Gras Cots, Art Lynch, Grant Philipo, Colie Knoke, Lani Silverman, Jade Satana, Siouxzan Perry, Sharla Rae Satana, Kevin Burke, Liane Langford, Nils Henftling, Arnie Bartz and Whitney Priebe Cross.who contributed to this upcoming book. Sadly, Francine York passed away on January 6th of this year.

Remembering a talented friend
Since his passing I feel even more of a responsibility to make sure everything he told me is double checked to ensure accuracy. Ted was also aware of my leg work tracking down and interviewing actors and actresses in his movies having them share their memories, along with Ted, in the book's pages about his movies. Many of these stars worked with Mr. Mikels in the 1960's, and all were more than happy to celebrate their moments with him. In an email Ted V. Mikels send me dated January 4, 2016, he wrote: "Kevin, you are incredible. I do not know how you are able to communicate with all of these people, but bless you for doing it. I feel honored that you are working so closely and so diligently in your appraisal of my work." My answer to that was that I was the one who felt truly honored to earn his trust.

A lifetime of love and achievement
The Life and Cinema of Ted V. Mikels is more than just a book. It is a piece of cinematic history now, and my personal commitment and responsibility to a man who inspired and brought joy to so many.

We love you, Ted.

Thanks for the life you shared.

Interview with Author about the book
An interview with me concerning the book "The Life and Cinema of Ted V. Mikels" appears online courtesy of Australia's Search My Trash movie resource website. The Interview was conducted by Michael Haberfelner. Read the interview here.

Posted by Kevin Collier at 12:13 PM No comments: